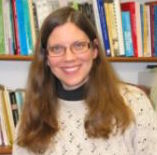 Professor Camilla Townsend is interested in relations between the indigenous and Europeans throughout the Americas. Her publications have spanned Mexico, the Andean Region and the Chesapeake. She is deeply immersed in the study of Nahuatl, the Aztec language, and her most intense focus is now on the sixteenth- and seventeenth-century writings left by Native American historians. Though the historical annals they produced, it is possible to catch a glimpse of indigenous conceptualizations of history as they existed at first contact.