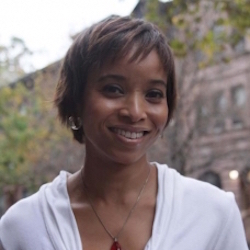 Nicole R. Fleetwood is Associate Professor in the Department of American Studies at Rutgers University and Graduate Faculty in the Department of Women's and Gender Studies. Her articles appear in American Quarterly, Signs, Social Text, tdr: the journal of performance studies, and edited anthologies.  Her book Troubling Vision: Performance, Visuality, and Blackness (University of Chicago Press 2011) is the recipient of the 2012 Lora Romero First Book Publication Prize of the American Studies Association.

Fleetwood received her Ph.D. from Stanford University in the Program in Modern Thought and Literature and her B.Phil. from the School of Interdisciplinary Studies at Miami University (Ohio) where she graduated magna cum laude. She has worked as a consultant and has collaborated with a number of arts organizations and programs, including the Ford Foundation’s Artography initiative, New Museum of Contemporary Art’s Visual Knowledge Program, Walker Art Center, Southern Exposure, San Francisco Arts Commission, and Youth Speaks.  She has served on the Constance Rourke Prize Committee for best essay published in American Quarterly (2007-2009) and the Minority Scholars’ Committee of the American Studies Association (2004-2007).

Her current book project is a study of prison art and visuality. She examines a range of visual art and practices emerging inside prisons and about prison life, including photography, painting, and collaborative works with arts organizations and commissioned artists.