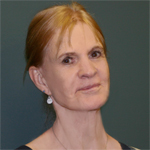 Professor Ellis currently focuses on two areas: creative non-fiction and women writers in the Restoration and eighteenth century, bringing to both an emphasis on narrative: how we write it, read it, connect to it and analyze it. In all her creative writing classes, but especially those in creative non-fiction, she emphasizes that we are learning to master a set of skills needed to shape disorderly materials into compelling narratives. In her women writers classes, she sees the eighteenth century as the time when the modern world that students take for granted was put in place, displacing very slowly a pre-modern set of beliefs and practices that we can still find in much of the non-European world. She believes that distinguishing modernity from pre-and-post-modernity helps students to understand not only the past but the present.