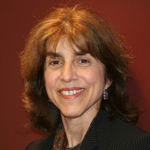 Professor Diamond is the author of of Unmaking Mimesis: Essays on Feminism and Theater (1997) and Pinter's Comic Play (1985); she is also the editor of Performance and Cultural Politics (1996). Her many journal publications include essays on seventeenth and twentieth century drama, and Freudian, Brechtian, and feminist theory. Her work continually explores the connection between performance and feminist or critical theory, using texts from early modernism through postmodern art. She is currently at work on a book on modernism and transatlantic performance.